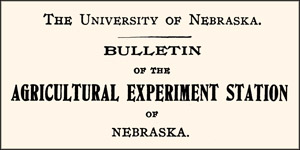 Haecker, A. L. and C. W. Melick (1905) A Test of Calf Rations -- Methods of Controlling Contamination of Milk during Milking (Bulletin of the Agricultural Experiment Station of Nebraska, Bulletin No. 87 - Volume 17, Article 3)

A Test of Calf Rations

Since the spring of 1899 the Department of Dairy Husbandry has been conducting experiments in calf rearing by using hand separator skim-milk and light rations of grain.

The first test was published in Bulletin No. 68 of this Station and dealt with a comparison of calves reared by hand with those sucking their dams. The hand-fed calves were reared on skim-milk, ground flaxseed being used to replace the lacking butter fat. This test resulted in a fine lot of calves reared at a very low cost, but it also brought out the fact that much more data were needed in the way of comparing rations to be used with skim-milk.

Methods of Controlling Contamination of Milk During Milking

Milk contamination takes place largely during the process of milking, especially when the cows are kept in the barn. It was, therefore, thought best to start' with investigations along this first and most troublesome source of infection, namely, milking.

The plan of the experiment was to test a number of advocated methods of lessening milk contamination. 'To do this, four cows were selected from the University dairy herd, all uniform in breed, weight, and time of lactation, so as to avoid, as much as possible,variation among individual animals.