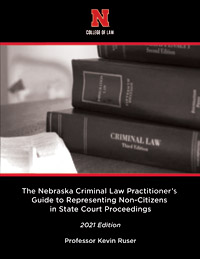 This Guide was last significantly updated in 2012 – nine years ago. In 2012, I wrote about how many developments there had been in the “crimmigration” field since the 2010 update to this Guide. Those developments pale in comparison to the developments that have occurred since 2012, however, both in terms of numbers and significance.

The United States Supreme Court has been a major player in this area since 2012, weighing in with a number of significant decisions during that period of time. In fact, two of those decisions, Moncrieffe v. Holder and Descamps v. U.S., fundamentally altered the way in which state statutes must be analyzed in order to determine if they carry immigration consequences for non-citizens. I have included a detailed discussion of these and other Supreme Court cases in the text of this edition and incorporated the holdings of those cases in the analyses of the Nebraska criminal statutes that accompany this edition of the Guide.

The Nebraska Supreme Court has also issued some interesting opinions in the last several years regarding post conviction relief in cases involving either failure of a court to give the immigration advisement to a defendant, as required by Neb. Rev. Stat. § 29-1819.02, or as the result of criminal defense counsel failing to give Padilla advice to a non-citizen client entering a guilty plea. This edition of the Guide includes my take on those state cases as well.

In an effort to make this Guide more user-friendly for criminal law practitioners, I have significantly altered the format of the statutory analysis appendix. Now, as you will see, the appendix takes the form of a chart that discusses the most important aspects of immigration consequences. My inspiration for this format came from the superb work being done by Kathy Brady and her folks with the Immigrant Legal Resource Center in their analysis of immigration consequences of selected California offenses. I was struck by the compact nature and succinctness of this format. I hope that you will find this chart format to be easier and quicker to use on a day-to-day basis, whether it be in the courtroom, the courthouse hallway, or your office.