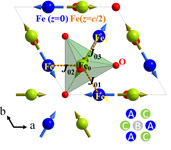 The crystal and magnetic structures of single-crystalline hexagonal LuFeO3 films have been studied using x-ray, electron, and neutron diffraction methods. The polar structure of these films are found to persist up to 1050 K; and the switchability of the polar behavior is observed at room temperature, indicating ferroelectricity. An antiferromagnetic order was shown to occur below 440 K, followed by a spin reorientation resulting in a weak ferromagnetic order below 130 K. This observation of coexisting multiple ferroic orders demonstrates that hexagonal LuFeO3 films are room-temperature multiferroics.