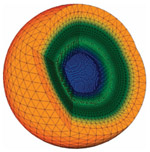 We study the magnetization dynamics of non-collinear spin textures realized via imprint of the magnetic vortex state in soft permalloy into magnetically hard out-of-plane magnetized Co/Pd nanopatterned heterostructures. Tuning the interlayer exchange coupling between soft- and hard-magnetic subsystems provides means to tailor the magnetic state in the Co/Pd stack from being vortex- to donut-like with different core sizes. While the imprinted vortex spin texture leads to the dynamics similar to the one observed for vortices in permalloy disks, the donut-like state causes the appearance of two gyrofrequencies characteristic of the early and later stages of the magnetization dynamics. The dynamics are described using the Thiele equation supported by the full scale micromagnetic simulations by taking into account an enlarged core size of the donut states compared to magnetic vortices.