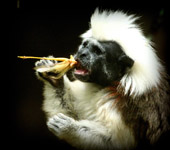 Voluntary food sharing in pinyon jays: The role of reciprocity and dominance

Food sharing offers a clear example of prosocial behavior, in which one individual’s actions benefit another. Researchers have proposed a range of hypotheses that explain why food sharing may occur among unrelated individuals. Two such hypotheses, reciprocity and dominance, have been tested in many species, including fish, corvids, rats, bats, and primates, showing that (1) recipients sometimes reciprocate sharing back to previous donors and (2) dominant individuals share more than subordinates. Although primates dominate the study of prosocial behavior, active donation of food is actually quite rare in primates. In contrast, several corvid species spontaneously share food much more frequently. Here, we explored the role of reciprocity and dominance in spontaneous food sharing among male pinyon jays (Gymnorhinus cyanocephalus); a North American corvid species that exhibits high levels of social complexity. Unlike much of the previous work, we tested prosocial behavior among unrelated, non-pair bonded adults. We observed high levels of active sharing, and donors showed clear preferences with whom they shared. We found no evidence that pinyon jays reciprocated shares in either the short or long term. This was true for both sharing within-dyads (direct reciprocity) and sharing irrespective of most recent partner identity (generalized reciprocity). However, dominance influenced sharing in one of our groups, with dominant individuals sharing more than subordinates. This study highlights corvids as a fruitful model for the study of the proximate mechanisms underlying naturally occurring prosocial behaviors.