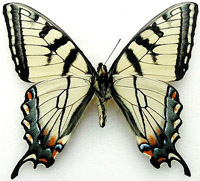 A New Species of Celastrina from the Northwestern United States and Southwestern Canada with a Lectotype Designation of Lycaena pseudargiolus var. nigrescens Fletcher (Lycaenidae: Polyommatinae)

Also available at the Internet Archive, the Biodiversity Heritage Library, Zobodat, and Zenodo

A new western azure species, Celastrina asheri, is described from the northwestern United States and southwestern Canada. A lectotype is designated for Lycaena pseudargiolus var. nigrescens Fletcher, 1903 to secure the identity of that name. C. asheri broadly overlaps with the northeastern range of C. echo (W. H. Edwards, 1864) but is usually very distinct from that species. C. lucia (W. Kirby, 1837) is narrowly sympatric with C. asheri in British Columbia, the southwest corner of Alberta and along the Rocky Mountains in Montana. As far as is known, C. asheri uses only red osier dogwood (Cornus sericea) and possibly oceanspray (Holodiscus discolor) as larval foodplants, while C. echo and C. lucia use a wide variety of larval foodplants. A lack of past research and confusion as a “form” of C. echo obscured the identity of C. asheri.