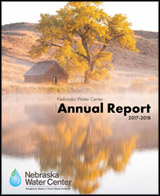 Literature from The Nebraska Water Center

The History of the UNL Water Center from 1964

Water is an integral part of Nebraska’s economy and well being in a state that depends on an adequate supply for all uses, including agricultural, municipal, industrial, recreational and wildlife habitat.

Nebraska is fortunate with regard to its water supply, having tremendous groundwater reserves which are estimated to be in excess of two billion acrefeet (an acre-foot being enough water to cover one acre of land with a foot of water, or approximately 325,000 gallons), combined with an estimated annual precipitation of 86 million acre-feet and annual average surface water inflows of 1.7 million acre-feet, give the state adequate supplies of water.

Nebraska has enough groundwater to cover the state to a depth of nearly 40 feet. However, the distribution of these waters as well as economic and other constraints of water utilization, often leave Nebraskans with challenges that make planning and management decisions difficult.

Within this background, the University of Nebraska—Lincoln (UNL) Water Center has facilitated water-related research, trained the next generation of water scientists, lawyers, engineers, economists and managers and assisted in applying research to Nebraska’s and the nation’s water problems. A primary goal has been to use federal and state resources to coordinate and administer water-related activities within existing units of Nebraska’s entire post-secondary educational system.

It has been said that we can’t know where we’re going until we understand where we’ve been, so as the Water Center looks to the future and observes its 40th anniversary, it is appropriate to review our beginnings. This report highlights the Water Center’s contributions to Nebraska and the nation. It documents why the network of state water resources research institutes was created and reports on some major accomplishments and programs of the Water Center over the past 40 years.

One note: Because the Water Center has had many different names over the years, it will be referred to as the “Water Center” throughout this publication, no matter what its official name was at the time.